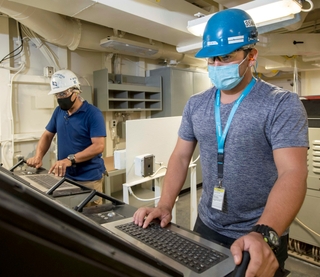 “Electronic systems light-off signifies that the network and consoles of the ship’s hull, mechanical and electrical systems are up and running,” said Steve Sloan, LPD program manager for Ingalls Shipbuilding. “This is a significant achievement in the construction timeline of the San Antonio-class LPD. We are proud of our crew for reaching this milestone, and we look forward to continuing to work toward the delivery of this strong and capable amphibious warship.”

Ingalls has delivered 11 San Antonio-class ships to the Navy and has three more under construction including Fort Lauderdale (LPD 28), Richard M. McCool Jr. (LPD 29), and Harrisburg (LPD 30). Ingalls was awarded a $1.5 billion contract for the construction of LPD 31 in April.