PASCAGOULA, Miss., Sept. 5, 2012 (GLOBE NEWSWIRE) -- Huntington Ingalls Industries (NYSE:HII) authenticated the keel of the U.S. Coast Guard's National Security Cutter Hamilton (WMSL 753) today at the company's Ingalls Shipbuilding facility. Mrs. Linda Kapral Papp, wife of Adm. Robert J. Papp Jr., commandant of the U.S. Coast Guard, is the ship's sponsor. Her initials were welded on a keel plate that will be part of the ship as long as it remains in the operational fleet.

A photo accompanying this release is available at http://media.globenewswire.com/hii/mediagallery.html?pkgid=14521

"Hamilton will be the most capable and technologically advanced cutter in the history of our service," said Adm. Papp, the principal speaker at the keel authentication. "To the shipbuilders and to the Coast Guard men and women who are overseeing Hamilton's construction, I have great faith you will build the Coast Guard and our nation a great cutter – a cutter that can cross the ever-changing oceans upon which we depend so much, complete her missions and bring her crew back safely again. Build her strong, knowing that the long, gallant line that precedes her is beckoning and the track line lies ahead on which she will set sail."

Following her husband's speech, Mrs. Papp sketched her initials on a steel plate, and they were permanently welded by Ingalls welder Kawana Womack, authenticating that the keel of Hamilton had been "truly and fairly" laid.

"Today represents a significant milestone not only in the construction of NSC 4, but in the NSC program overall," said Ingalls Shipbuilding President Irwin F. Edenzon. "We have reached stability in the design and in the NSC class-build plans. This is a good program because the Coast Guard has stabilized the requirements and allowed us to successfully manage our construction techniques and reduce cost in the fabrication process. And in turn, we're delivering great ships. We're proud to be building ships for the U.S. Coast Guard, and we look forward to building even more."

Ingalls has delivered three NSCs, the flagships of the Coast Guard's cutter fleet. They are designed to replace the 378‐foot Hamilton-class high-endurance cutters, which entered service during the 1960s. Hamilton (WMSL 753) is the company's fourth NSC and is scheduled to be delivered in the third quarter of 2014. A fifth NSC, Joshua James (WMSL 754), has begun construction, is currently 4 percent complete and is expected to be delivered in the second quarter of 2015.

The Legend-class NSC is capable of meeting all maritime security mission needs required of the high-endurance cutter. The cutter includes an aft launch and recovery area for two rigid hull inflatable boats and a flight deck to accommodate a range of manned and unmanned rotary-wing aircraft. It is the largest and most technologically advanced class of cutter in the U.S. Coast Guard, with robust capabilities for maritime homeland security, law enforcement, marine safety, environmental protection and national defense missions. The Legend class of cutters plays an important role in enhancing the Coast Guard's operational readiness, capacity and effectiveness at a time when the demand for their services has never been greater. 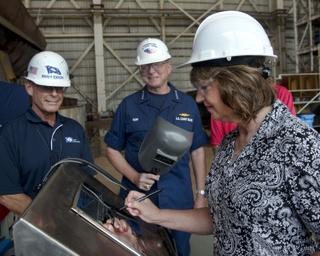