PASCAGOULA, Miss., Nov. 22, 2011 (GLOBE NEWSWIRE) -- Huntington Ingalls Industries (NYSE:HII) announced that its Ingalls Shipbuilding division has been awarded a $51.3 million cost-plus-fixed-fee contract for life-cycle engineering and support services on the U.S. Navy's USS San Antonio (LPD 17) class of amphibious transport dock ships. This is the second of four annual options associated with a base contract awarded in February 2010, with a potential value of $249.4 million.

The February 2010 contract award to Ingalls was the second for LPD ship services. The first contract was awarded in 2005. Two more options are expected.

"To be awarded this option is critical because it allows our extensive post-delivery support work to continue on these complex amphibious ships," said Doug Lounsberry, Ingalls Shipbuilding's vice president and program manager, LPD 17. "We remain committed to building the utmost quality amphibious ships, and this focus continues even after ships enter the fleet. These support service contracts provide necessary engineering resources to ensure the men and women of our U.S. Navy and U.S Marine Corps have the best possible product in defending freedom."

The San Antonio-class ships are 684 feet long and 105 feet wide and displace approximately 25,000 tons. Their principal mission is to deploy the combat and support elements of Marine Expeditionary Units and Brigades. The ships can carry up to 800 troops and have the capability of transporting and debarking landing craft air cushion (LCAC) or conventional landing crafts, augmented by helicopters or vertical take-off and landing aircraft such as the MV-22. These ships will support amphibious assault, special operations or expeditionary warfare missions through the first half of the 21st century.

Statements in this release, other than statements of historical fact, constitute "forward-looking statements" within the meaning of the Private Securities Litigation Reform Act of 1995. Forward-looking statements involve risks and uncertainties that could cause our actual results to differ materially from those expressed in these statements. Factors that may cause such differences include: changes in government and customer priorities and requirements (including government budgetary constraints, shifts in defense spending, and changes in customer short-range and long-range plans); our ability to obtain new contracts, estimate our costs and perform effectively; risks related to our spin-off from Northrop Grumman (including our increased costs and leverage); risks related to the amount of the estimated goodwill impairment charge versus the final amount and any additional impairment charges; our ability to realize the expected benefits from consolidation of our Gulf Coast facilities; natural disasters; adverse economic conditions in the United States and globally; and other risk factors discussed in our filings with the U.S. Securities and Exchange Commission. There may be other risks and uncertainties that we are unable to predict at this time or that we currently do not expect to have a material adverse effect on our business, and we undertake no obligations to update any forward-looking statements. 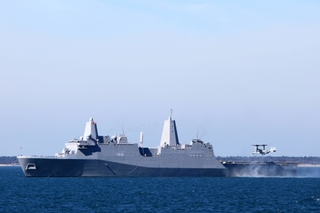