PASCAGOULA, Miss., April 1, 2011 (GLOBE NEWSWIRE) -- Huntington Ingalls Industries, Inc. (NYSE:HII) announced today a U.S. Navy contract awarded to its Ingalls Shipbuilding division for the construction of the 10thSan Antonio-class amphibious transport dock. The contract, worth $1.5 billion, will be used to build John P. Murtha (LPD 26), with construction expected to start in May.

A photo accompanying this release is available at http://media.globenewswire.com/hii/mediagallery.html?pkgid=9439

Huntington Ingalls Industries, America's largest military shipbuilder, was previously a business sector of Northrop Grumman Corp. until effectively separating on March 31 in a spinoff of the company to shareholders.

"This is the first contract awarded to our new company, and our shipbuilders are excited about continuing the LPD product line," said Irwin F. Edenzon, corporate vice president and general manager, Gulf Coast Operations. "More than 1,500 shipbuilders will be working on LPD 26 over the next four years, and our focus will be on safety, quality, cost and schedule. We've been working hard for the last three years making some changes and focusing on important process improvements. I am confident that LPD 26 will be a great ship, and that is our commitment to the sailors and Marines who will serve on her."

Ingalls Shipbuilding has delivered the first five ships of the San Antonio class, LPDs 17-21. San Diego (LPD 22) will undergo sea trials this summer; Anchorage (LPD 23) will be christened at the company's Avondale facility on May 14; Arlington (LPD 24) was christened on March 26, and Somerset (LPD 25) is 40 percent complete and will be launched in 2012.

The 11 planned ships of the San Antonio class are a key element of the Navy's ability to project power ashore. Collectively, these ships functionally replace more than 41 ships (the LPD 4, LSD 36, LKA 113 and LST 1179 classes of amphibious ships), providing the Navy and Marine Corps with modern, sea-based platforms that are networked and survivable and built to operate with 21st century platforms, such as the MV-22 Osprey.

Huntington Ingalls Industries (HII) designs, builds and maintains nuclear and non-nuclear ships for the U.S. Navy and Coast Guard and provides after-market services for military ships around the globe. For more than a century, HII has built more ships in more ship classes than any other U.S. naval shipbuilder. Employing nearly 38,000 in Virginia, Mississippi, Louisiana and California, its primary business divisions are Newport News Shipbuilding and Ingalls Shipbuilding. For more information, please visit www.huntingtoningalls.com. 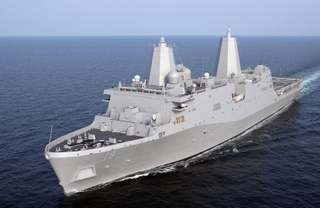