"We thank our nation for honoring and remembering those 40 aboard Flight 93 with this extraordinary tribute, the Somerset," said Patrick White, president of Families of Flight 93 and principal speaker at the event. White's cousin, Louis J. Nacke II, died on board the flight. "These passengers prevented additional tragedy on Sept. 11 through their selfless actions. The Somerset and her steadfast crew — now and in the future — are both a living tribute and vigilant reminder of sacrifice made to protect the lives of unknown others."

Additional family members of the Flight 93 heroes were in attendance, as well as several residents of Somerset County.

"Built for survivability and flexibility, LPD 25 is being crafted by the hearts, heads and hands of some of the best shipbuilders in the world and will be manned by our nation's finest," said HII President and CEO Mike Petters. "Like America, like the members of the Somerset families here today and like the shipbuilders of Avondale, these sailors and Marines will persevere in times of uncertainty and change. We take great pride in them and have the utmost respect for their dedication and service to America, the greatest country in the world."

Ingalls is building the entire San Antonio (LPD 17) class of ships, the newest addition to the Navy's 21st century amphibious assault force. LPD 25 is the company's ninth ship. Ingalls received a $1.5 billion contract to build an 11th ship in the class on Friday.

"As shipbuilders, we know the significance of this ship," said Ingalls Shipbuilding President Irwin F. Edenzon. "For decades, our shipbuilders have been building ships to defend our great nation. LPD 25 will continue this legacy and be a testimony of their professionalism, dedication and tenacity for 40 years or more. They are building Somerset, strong and proud. Not only for the sailors and Marines who will sail in her, but as a tribute to the heroes of Flight 93 who protected our nation — with strength, pride and with our deepest gratitude and respect."

Cmdr. Cole Hayes is the ship's prospective commanding officer. He will lead a crew of 360 Navy officers and sailors as well as three Marines.

"This ship is named to honor that indomitable fighting spirit — the timeless American who will fight for the most basic human rights," said Rear Adm. David H. Lewis, the Navy's program executive officer for ships. "This ship will sail until the year 2050 and beyond. Tens of thousands of sailors will serve aboard her, and thousands more will sail in company with her. Millions of people throughout the world will see her, visit her and read about her exploits. They will wonder why the name Somerset was given to such a great and fine warship. They will read, they will see, they will learn, and they will be amazed."

The Families of Flight 93 are dedicated to the building and funding of the Flight 93 National Memorial in Somerset County, PA. Visit www.honorflight93.org for more information and to contribute to the memorial. 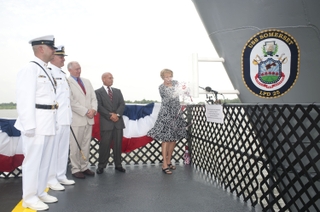