"Today is a testament to the hard work and outstanding performance by our LPD shipbuilding team," said Doug Lounsberry, vice president, LPD 17 Program. "Our dedicated shipbuilding professionals continue to improve on the complex design, construction and testing of each ship in this program. That diligent work lays the foundation necessary for sailors and Marines to accomplish their missions while deployed."

The ship recently completed U.S. Navy acceptance trials, with shipbuilders successfully accomplishing more than 200 tests on the ship during the sea trial period.

Ingalls has now delivered seven ships in the class and has four more in various stages of development or construction. LPDs are built to be survivable and flexible. The complex, survivable ships enable the services to carry out their missions without constraints or additional assets. 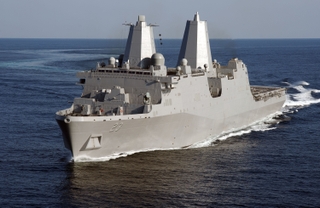