"The delivery of LPD 24 caps an outstanding year in our amphibious shipbuilding programs," said Ingalls' LPD Vice President Doug Lounsberry. "LPD 24 is the third ship we've delivered within a year, and it is a testament to the work ethic and dedication of our LPD shipbuilders. We are receiving tremendous feedback from the Navy on how the ships in this class are performing. It's a hot production line right now, and we are ready to build more."

The ship performed well during builder's and U.S. Navy acceptance trials. Ingalls has three more LPDs in various stages of development or construction. Built to be survivable and flexible, these complex warships enable the services to carry out their missions without constraints or additional assets.

LPD 24 sailors and Ingalls' shipbuilders gathered on the flight deck to view the short delivery ceremony where the official DD 250 paperwork was signed. The ship is scheduled to be commissioned in the U.S Navy fleet sometime next spring. 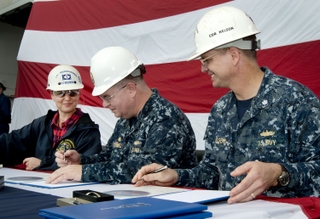