"Our shipbuilders have done an outstanding job in incorporating lessons learned from the first aft PVLS products," said Ingalls DDG 1000 Program Manager Steve Sloan. "Delivering these products a week early demonstrates smart shipbuilding by using previous experiences to integrate an improved plan to do it better the second time around. With a constant focus on safety and quality, our shipbuilders have done outstanding work on these units."

General Dynamics' Bath Iron Works is building the DDG 1001 hull, while Ingalls is building the PVLS assemblies in Pascagoula and the composite hangar and deckhouse at the company's composite center of excellence in Gulfport. The PVLS distributes the missile launchers for the destroyer in separate four-cell launcher compartments along the ship's hull. It is an alternative to the traditional centralized missile magazines found on DDG 51-class ships. The PVLS launcher configuration was chosen to significantly enhance the ship's survivability.

Four assembly units make up the aft PVLS. The first two units were delivered in July 2012. The rest of the DDG 1001 work is expected to be complete in the first quarter of 2014. 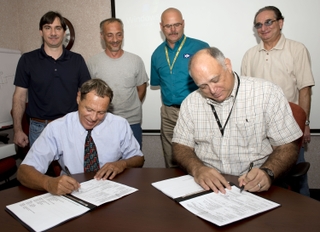