"Our shipbuilders' performance on this hangar composite construction has allowed us to deliver it nine days ahead of the commitment made last year," said Ingalls' DDG 1000 Program Manager Steve Sloan. "This construction time is a significant improvement from the first set of class products to the second set. It is a testament to the hard work and excellent logistics and manufacturing processes put in place on this program. A considerable amount of outfitting transpired earlier in the process allowing for the early delivery time."

The 220-ton structure will be translated to a shipping barge and sent to Maine in early October. Ingalls is building the hangar, peripheral vertical launch system (PVLS) and composite deckhouse for Michael Monsoor. The PVLS was delivered in July, and all that remains is the deckhouse delivery expected in first quarter of 2014. 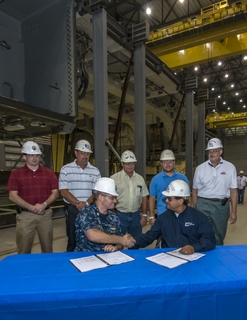