"This delivery exemplifies the unique skill and craftsmanship of our shipbuilders," said Doug Lounsberry, Ingalls Shipbuilding's vice president and program manager, LPD 17 program. "What we are accomplishing collectively in the LPD program with the Navy and our Supervisor of Shipbuilding partners proves the value of our shipbuilding knowledge. This shipbuilding program, which includes vendors and businesses from 39 different states, demonstrates a solid business plan which continues to progress. The U.S. Navy sailors and Marines will have a safe, extremely reliable vessel built with pride and a deep commitment to our war fighters to provide them the most capable ships in the fleet in which to perform their diverse mission. I wish the crew good luck, and I want to congratulate our shipbuilders. This is a great way to end the year."

Today's event officially transfers custody of the ship from HII to the Navy. San Diego recently completed acceptance sea trials with the Navy's Board of Inspection and Survey observing. Ingalls' test and trials team thoroughly tested the ship's main propulsion, steering, communications suite and deck missions systems. Some of the crew members were aboard for acceptance trials; the full crew will move aboard the ship the first week of January.

"Accepting San Diego today on behalf of the Navy is an honor and a privilege I have been looking forward to for a long time," said Cmdr. Jon Haydel, the ship's commanding officer. "The teamwork between the Navy and Ingalls has been a testament to how shipbuilding should be done, with constant and effective two-way communication throughout the construction and outfitting process. I look forward to bringing this magnificent warship and her outstanding crew home to San Diego to start her service to the nation in the world's finest Navy."

LPD 22 is scheduled to be commissioned in the spring of 2012 in San Diego. It is the fourth ship named in honor of the military town and largest Navy base in the Pacific.

San Antonio-class ships are 684 feet long and 105 feet wide and displace approximately 25,000 tons. Their principal mission is to deploy the combat and support elements of Marine Expeditionary Units and Brigades. The ships can carry up to 800 troops and have the capability of transporting and debarking landing craft air cushion (LCAC) or conventional landing crafts, augmented by helicopters or vertical take-off and landing aircraft such as the MV-22. The ships will support amphibious assault, special operations or expeditionary warfare missions through the first half of the 21st century.

Ingalls has now built and delivered the first six ships in the class, and there are four more under construction. 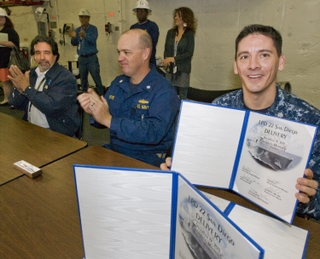