"Today we deliver another great ship to our nation's Coast Guard and celebrate the ingenuity and craftsmanship of the designers and builders who make it happen," said Ingalls Shipbuilding President Irwin F. Edenzon. "We have reduced the production schedule, man-hours and sea trial cards on NSC 3. We are proud of these accomplishments because they are a cornerstone in the relationship Ingalls has formed with the Coast Guard—a relationship that has allowed us to achieve stability in the class plan for building NSCs, which allows us to continue to improve the building process for these great ships."

Ingalls has now delivered three NSCs, which are the flagship of the Coast Guard's cutter fleet, designed to replace the 378‐foot Hamilton-class High-Endurance Cutters, which entered service during the 1960s.

"This ship has come along further than her predecessors," said Rear Admiral John Korn, the Coast Guard's assistant commandant for acquisition and chief acquisition officer. "All three NSCs are great ships but this one has made several improvements in critical learning from Bertholf and Waesche. Thanks to Ingalls, Lockheed Martin and all the other contractors. We look forward to continuing our work together to build the most capable and technologically advanced cutters that the Coast Guard has ever seen. And it will be capable of everything we can imagine in a 21st century mission."

Ingalls builds the NSC hull and mechanical and electrical systems, while Lockheed Martin builds and integrates the command, control, communications, computers, intelligence, surveillance and reconnaissance (C4ISR) capabilities onboard the cutters.

"I would like to offer my particular appreciation to the hundreds of dedicated skilled tradesmen and women who put their skill, commitment and personal pride in transforming plate and component into the cutter we have here today," said Capt. Charles L. Cashin, Stratton's prospective commanding officer.

The Legend-class NSC is capable of meeting all maritime security mission needs required of the High Endurance Cutter. The cutter includes an aft launch and recovery area for two rigid hull inflatable boats and a flight deck to accommodate a range of manned and unmanned rotary wing aircraft. It is the largest and most technologically advanced class of cutter in the U.S. Coast Guard, with robust capabilities for maritime homeland security, law enforcement, marine safety, environmental protection and national defense missions. This class of cutters plays an important role enhancing the Coast Guard's operational readiness, capacity and effectiveness at a time when the demand for their services has never been greater. 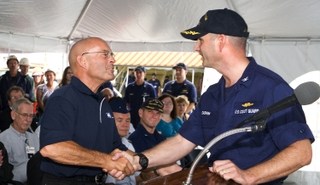