"These teams have taken inefficient processes and changed them and developed new processes to do their jobs better," said Ingalls Shipbuilding President Irwin F. Edenzon. "In all cases they have given us examples of how all shipbuilders should do their jobs. They personify leadership and engagement, and I'm proud of each and every one of them. They perfectly exemplify our shipbuilding priorities of safety, quality, cost and schedule."

Each year, Ingalls Shipbuilding presents the President's Award for Excellence to shipbuilders for their extraordinary performance and outstanding contributions in the areas of innovation and technology, customer satisfaction and operational excellence.

Cox not only developed the yard audit process used to improve care and protection, but she executed the closure of the East Bank Facility at no cost to the company. She captured the process so it will be repeatable.

Wilson initiated action to identify and recover unused or damaged material for proper disposition, resulting in savings of more than $1.1 million by eliminating duplicate purchases and an improved scrapping process.

Ingalls led a Navy and industry Technical Review Team (TRT) to provide recommendations for the disposition of deficient welds for ships under construction and in-service. The TRT provided a bottom-line benefit to the company by significantly reducing the number of welds that need to be inspected or repaired.

The team achieved more grand blocks/blocking on the amphibious transport dock Somerset (LPD 25) than any previous LPD, with increased levels of outfitting. Unit connections were completely welded prior to erection of the blocked units. This resulted in 54,000 man-hours of work that will be accomplished on land instead of on board the ship—with a resultant increase in safety, reduction in overall man-hours and improvement in schedule.

This team designed, procured, constructed and tested a portable diesel engine lubricating oil flushing system that exceeds customer requirements. Its portability allows easy shipment to company locations as well as deployment to fleet support areas. Cost savings will be realized in the reduced flushing of some systems, as well as eliminating the possibility of rework or damaged systems due to foreign matter.

The "One List" team created a single document that combined Ingalls' work lists and government work lists into a common database to allow the company to limit the number of open deficiencies presented to the Navy's Board of Inspection and Survey (INSURV) prior to sea trials. This enabled ship's management and the test team to have a single electronic location to define all work-to-go and allowed the team to make all work visible to everyone, eliminating redundancy and maximizing efficiencies while completing all required work.

This team standardized pipe hangers across all contracts, which will reduce construction costs by lowering the unit cost on the landing patrol dock (LPD) program and reducing the total quantity of pipe hangers required on each LPD-class ship. The standardization will also create a single repeatable procedure for pipe hangers on all ship classes. The changes should result in a large cost savings on future ship classes.

Photos of the award-winners are available on HII's flickr site: http://www.flickr.com/photos/huntingtoningalls/. 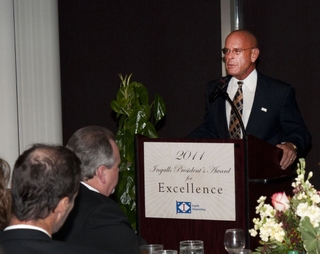