"I'm proud to be able to show our Navy and congressional leadership first-hand what they can't see in charts and reports," Edenzon said. "We have a tremendously talented group of craftsmen and women who demonstrate their unique skills and expertise on a daily basis. They build some of the most complex products in the defense industry.

"Adm. Greenert spoke at the christening of Arlington (LPD 24) here in March, and it is a pleasure to welcome him back to Ingalls in his new role as CNO," Edenzon said. "And I always look forward to Sen. Wicker's visits to our shipyard. He understands how important the work is that we do here, and I know he's also very proud of our shipbuilders."

Sen. Wicker and Adm. Greenert were given a tour of the facility as well as a briefing on-board the company's sixth amphibious transport dock, San Diego (LPD 22). The ship successfully completed builder's sea trials earlier this month, and shipbuilders are currently preparing the ship for U.S. Navy acceptance trials in November.

"What the amphibious ships bring to you is a small footprint and great capability," Adm. Greenert said. "It's what the Commandant of the Marine Corps refers to as a middleweight. It brings you persistence, and it brings you a necessary lethal force of credible combat power. And that's an offshore option when the President has a demand for it. So the kind of multi-mission, multi-capability and cutting-edge technology built here in this shipyard will serve us and in each of those ships for 30 to 40 years. It's an investment in our future for the Navy-Marine Corps team."

Adm. Greenert is on the Mississippi Gulf Coast to visit the shipyard and to be the principal speaker at the annual "Salute to the Military" celebration Tuesday night in Biloxi. Sen. Wicker officially hosted the CNO during his visit.

"More than 11,000 Americans work here at the Ingalls shipyard," Sen. Wicker said. "We're proud of what they've accomplished, and we're proud of what they mean to Mississippi, the United States of America and frankly, the security of the world over the next number of decades. We're going to do everything we can in the congressional delegation of Mississippi to protect the jobs here, which means continued employment for Mississippians and Americans, but also continued security." 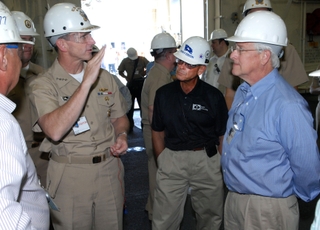