"We're watching this ship leave today with a lot of pride," said Doug Lounsberry, Ingalls' vice president and program manager, LPD 17 program. "This represents a turning point in LPD construction. Our shipbuilders have done an outstanding job of fine-tuning the construction process, and we look forward to continuing this success on future LPDs. We understand the importance of each and every amphibious ship we build to the overall mission of our U.S. Navy and U.S. Marine Corps customers, and rest assured, the LPDs will provide them exactly what is necessary to accomplish their operations."

"This ship had an outstanding post-delivery availability period, and I believe LPD 22 will be entering the U.S. Navy fleet as the best LPD yet," Lounsberry said. "We received great accolades from our Navy customer, including a quote calling the ship a 'model of success' in the LPD 17 program."

LPD 22 is scheduled to be commissioned on May 19 in San Diego. It is the fourth ship named in honor of the military town and home of the largest Navy base in the Pacific.

San Antonio-class ships are 684 feet long and 105 feet wide and displace approximately 25,000 tons. Their principal mission is to deploy the combat and support elements of Marine Expeditionary Units and Brigades. The ships can carry up to 800 troops and have the capability of transporting and debarking landing craft air cushion (LCAC) or conventional landing crafts, augmented by helicopters or vertical take-off and landing aircraft such as the MV-22. These ships will support amphibious assault, special operations or expeditionary warfare missions through the first half of the 21st century.

San Antonio-class ships are a key element of the Navy's ability to project power ashore. Collectively they functionally replace more than 41 ships (the LPD 4, LSD 36, LKA 113 and LST 1179 classes of amphibious ships), providing the Navy and Marine Corps with modern, sea-based platforms that are networked, survivable and built to operate with 21st century platforms, such as the MV-22 Osprey.

Ingalls has now built and delivered the first six ships in the class, and there are four more under construction. 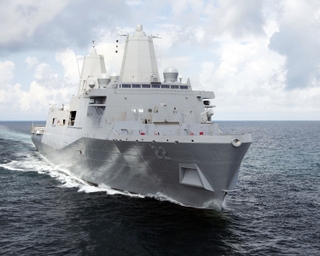