"The DDG 51 program continues to be a model of success for our company," said DDG 51 Program Manager George Nungesser. "We have talented, experienced shipbuilders working on this program, and they have provided excellent quality on Aegis destroyers since the program's inception."

The start-of-fabrication milestone signifies that 100 tons of steel have been cut for DDG 114. Ingalls uses state-of-the-art robotic cutting machines to ensure the steel is cut and fabricated to exact Navy specifications. Ralph Johnson is expected to be delivered in the first half of 2017.

"It was just fantastic, and I learned so much about shipbuilding," Mrs. McRaven said. "It was nice to meet so many shipbuilders. They're all so dedicated to their jobs and proud of what they do. I feel like they're serving in the military as well because they're building great ships for us."

DDG 114 is named to honor U.S. Marine Corps Pfc. Ralph Henry Johnson, who was awarded the Medal of Honor for his heroic actions that saved others during the Vietnam War. Johnson shouted a warning to his fellow Marines and hurled himself on an explosive device, saving the life of one Marine and preventing the enemy from penetrating his sector of the patrol's perimeter. Johnson died instantly. The Charleston, S.C., native had only been in Vietnam for two months and a few days when he was killed, at the age of 20.

Ingalls is also building the destroyer John Finn (DDG 113). Construction began last September, and its keel laying is set for Nov. 4. John Finn is expected to be delivered to the Navy in the later part of 2016.

On June 3, Ingalls was awarded a $3.3 billion multi-year construction contract to build five more DDG 51 destroyers, ensuring Ingalls will build DDGs for the next decade. Upon delivery of the FY17 DDG, Ingalls will have built 35 of the ships.

To date, Ingalls has delivered 28 DDG 51 ships to the U.S. Navy. This highly capable, multi-mission ship can conduct a variety of operations, from peacetime presence and crisis management to sea control and power projection, all in support of the United States' military strategy. DDGs are capable of simultaneously fighting air, surface and subsurface battles. The ship contains myriad offensive and defensive weapons designed to support maritime defense needs well into the 21st century. 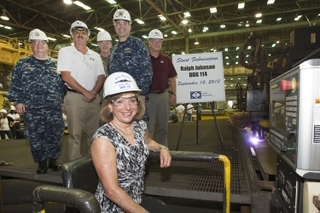