"This is a significant milestone for Ingalls Shipbuilding and for the U.S. Navy," said Doug Lounsberry, vice president, LPD program. "It is the first ship we've started with the Ingalls name, and it will become the 10th ship in the class. Our shipbuilders are highly motivated to begin construction on this ship, and we look forward to delivering the most efficiently built LPD to date. These versatile ships provide unique capabilities to our sailors and Marines and allow them to perform several different missions in defense of our freedom."

The start of fabrication shipbuilding milestone signifies that 100 tons of steel have been cut and fabricated. The steel is cut by a robotic plasma arc cutting machine at Ingalls' steel fabrication complex. The next milestone for LPD 26 will be the ship's keel laying, scheduled for the first quarter of 2012. LPD 26 is scheduled to be launched in the third quarter of 2014 and delivered to the Navy in the fourth quarter of 2015.

The 11 planned ships of the San Antonio class are a key element of the Navy's ability to project power ashore. Collectively, these ships functionally replace more than 41 ships (the LPD 4, LSD 36, LKA 113 and LST 1179 classes of amphibious ships), providing the Navy and Marine Corps with modern, sea-based platforms that are networked and survivable and built to operate with 21st century platforms, such as the MV-22 Osprey.

Ingalls Shipbuilding has delivered the first five ships of the LPD 17 class, LPDs 17-21. San Diego (LPD 22) will undergo sea trials later this year; Anchorage is currently 82 percent complete and is expected to be delivered in the second quarter of 2012; Arlington (LPD 24) was christened on March 26, and Somerset (LPD 25) is more than 50 percent complete and will be launched in 2012. 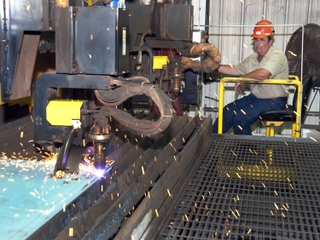