"Our shipbuilders have done outstanding work to make us more efficient in building this ship, driving the cost down and becoming more competitive," said Ingalls Shipbuilding President Irwin F. Edenzon. "This not only positions us to continue all the way through the current build plan of eight ships, but we're going to see if we can get the Coast Guard interested in four more. We're also going to position ourselves to be the winner of the Offshore Patrol Cutter competition, because we've proven we build great ships here at Ingalls."

The fifth NSC is named for Joshua James, who is credited with saving more than 600 lives along the New England coastline during a nearly 60-year career in the 1800s with the U.S. Life Saving Service. James' great-great-niece, Charlene Benoit is the ship's sponsor, and she authenticated the keel, a maritime tradition signifying the keel of the ship has been "truly and fairly laid." Her initials were welded onto a steel plate by Ingalls welder D.J. Robinson.

"I'm remarkably proud that his legacy is honored this way, and to be offered the stewardship as being sponsor is just a wonderful experience," said Mrs. Benoit, whose great-grandfather Capt. Samuel James, designed and built the surfboats used by his brother. "The efficiency on building this ship is remarkable when you consider the undertaking and the amount of people working on the cutter. This shipyard is a fantastic place."

Ingalls has delivered three National Security Cutters to the Coast Guard. The fourth ship, Hamilton (WMSL 753), will be christened on Oct. 26. Currently James has all 45 units in production and is 17 percent complete. She will be launched in spring of 2014 and delivered to the Coast Guard in the summer of 2015. Ingalls was recently awarded a $487 million contract to build a sixth NSC.

"The Coast Guard Atlantic area will be the recipients of NSC 4 and NSC 5, and they need these ships complete, on time and deployable upon arrival," said David Blackburn, U.S. Coast Guard's Project Resident Office Director, Gulf Coast. "The Coast Guard awarded NSC 6 production contract on April 30, and we are negotiating long-lead materials for a seventh. The commandant remains steadfast in his petition for a minimum of eight NSCs. Thank you, Ingalls, for your consistent improvement efforts on this program. You have become better with each successive cutter."

The Legend-class NSC is capable of meeting all maritime and national security mission needs required of the high-endurance cutter, including new requirements in support of Arctic exploration. The cutter includes an aft launch and recovery area for two rigid-hull inflatable boats and a flight deck to accommodate a range of manned and unmanned rotary wing aircraft. It is the largest and most technologically advanced class of cutter in the Coast Guard, with robust capabilities for maritime homeland security, law enforcement, marine safety, environmental protection and national defense missions. This class of cutters plays an important role enhancing the Coast Guard's operational readiness, capacity and effectiveness at a time when the demand for their services has never been greater. 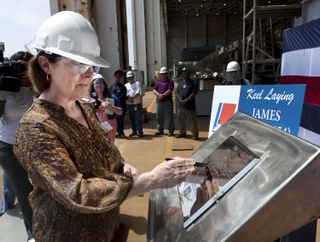