"This ceremony is about what we do in America to preserve freedom and to project the forces of democracy and peace all over the world," said Lott. "When we go to war, ships built at Pascagoula are there first. This is also an occasion to honor the men and women of this shipyard. My dad worked here. I take great pride in being from Pascagoula, Jackson County, Miss., home of Ingalls, and now the home of the great international corporation Northrop Grumman. People know about other parts of Mississippi, but they know one thing about Pascagoula -- ships. We build the best ships in the world right here."

"I thank all of those at Northrop Grumman and Naval Sea Systems Command for their efforts in getting us to this important juncture," said Hagee. "I know the people that will build this ship will build a warship designed to go into and return from harm's way. I can assure you that the Navy-Marine Corps team will have the Marines and sailors to man her who are focused on war fighting excellence in order to preserve our nation's security."

The culmination of the ceremony was the authentication by Lott, Hagee and the ship's sponsor, Mrs. Silke Boie Hagee, wife of Gen. Hagee, that the keel of the ship "was truly and fairly laid." Northrop Grumman's Willie E. Griffin, a ship builder of 35 years, performed the ceremonial welding of the authenticators' initials on the nameplate.

"In LHD 8, the future of expeditionary warfare is assured, as is operational maneuvering from the sea base," said Dur. "We are anxious to get on to the next level, but today we are witnessing the introduction of LHD 8 -- the best in class. I know I speak for all of us at Northrop Grumman when I say that as we begin building the fifth amphibious ship under construction in our shipyards today, we are ready to do our part in support of this awesome Navy-Marine Corps team."

The Navy selected the name Makin Island for LHD 8 to commemorate the daring raid carried out in August 1942 by Marine Corps companies A and B, second raider battalion, on Japanese-held Makin Island, in the Gilbert Islands.

The raid was launched from the submarines USS Nautilus and USS Argonaut, and succeeded in routing the enemy forces based there, gaining valuable intelligence. The raid's leader, Marine Corps Lt. Col. Evan Carlson, was awarded the Navy Cross for his actions; Marine Corps Sgt. Clyde Thompson was awarded the Medal of Honor for heroism -- the first enlisted Marine to be so honored during World War II.

Also in attendance at the ceremony were four members of the Marine Raiders Association, including retired Marine Corp Lt. Col. Brian J. Quirk who is a survivor of the Makin Island assault.

Makin Island (LHD 8) is the eighth ship in the Wasp (LHD 1) class of Navy large-deck multipurpose amphibious assault ships built by Northrop Grumman Ship Systems. The mission of these ships is to enable the Navy/Marine Corps team to accomplish a seamless transition "from the sea" to the land battle, primarily as the centerpiece of a Navy Expeditionary Strike Group (ESG). A multimission ESG is fully capable of amphibious assault, advance force, and special purpose operations, as well as non-combatant evacuation and other humanitarian missions. The previous seven ships of the class were also built by Northrop Grumman Ship Systems.

Northrop Grumman Ship Systems includes primary operations in Pascagoula and Gulfport, Miss., and in New Orleans and Tallulah, La., as well as in a network of fleet support offices in the U.S. and Japan. Ship Systems is one of the nation's leading full-service systems companies for the design, engineering, construction and life cycle support of major surface ships for the U.S. Navy, U.S. Coast Guard and international navies, and for commercial vessels of all types.

Members of the news media may receive our releases via e-mail by registering at: 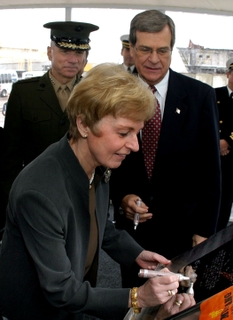