NEWPORT NEWS, Va., July 31, 2004 (PRIMEZONE) -- Northrop Grumman Corporation's (NYSE:NOC) Newport News sector celebrated today its first submarine christening in nearly a decade when Laura Bush, First Lady of the United States and the ship's sponsor, broke a bottle of American-made sparkling wine across the hull of the Virginia-class submarine Texas (SSN 775). As she performed this time-tested toast, she said, "I christen thee United States Ship Texas. May God bless all who sail her."

A photo accompanying this release is available at http://media.primezone.com/noc/.

Mrs. Bush said the day celebrated the devotion of sailors and shipbuilders. "She's built by the finest craftsmen and engineers in the world," she said. "This magnificent ship is a tribute to your skill."

U.S. Sen. Kay Bailey Hutchison of Texas was the keynote speaker for the ceremony and spoke about the pride Texans feel for the first submarine named for the Lone Star State. "This is a great day for the forces of good in this world," she said. "This ship is another exhibit in our strong national resolve to win the war on terror."

The approximately 4,000 invited guests were entertained by the U.S. Atlantic Fleet Band and the Texas A&M Fightin' Aggie Wranglers, a country and western dance group comprised of Texas A&M University students. Guests included Newport News and Electric Boat employees who are building Texas and their families, family and friends of the Texas crew, U.S. Navy personnel and government officials.

Texas is the second ship of the Virginia class and one of the first warships designed for the post-Cold War environment. With improved stealth, sophisticated surveillance capabilities and special warfare enhancements, it will provide undersea supremacy well into the 21st century.

The keel for Texas was laid on July 12, 2002, with Laura Bush as the keel authenticator. The submarine is scheduled for delivery to the Navy in 2005. Northrop Grumman Newport News is teamed with General Dynamics Electric Boat to build the first 10 ships of the Virginia class. Current plans call for 30 Virginia class boats in the fleet.

For more information about the Texas (SSN 775), please visit www.nn.northropgrumman.com/texas.

Members of the news media may receive our releases via e-mail by registering at:http://www.northropgrumman.com/cgi-bin/regist_form.cgi 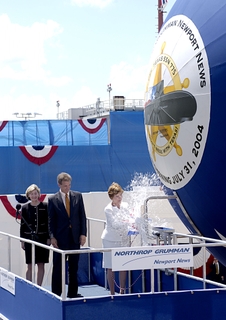