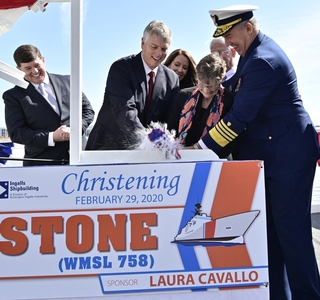 The ship honors Coast Guard officer Cmdr. Elmer “Archie” Fowler Stone, who made history in 1919 for being one of the two Coast Guard pilots to successfully make the first transatlantic flight in a Navy seaplane. Stone’s great niece, Laura Cavallo, officially christened the ship.

“Today we celebrate the time and talents our shipbuilders have invested in this incredible ship,” Ingalls Shipbuilding President Brian Cuccias said. “The success of the National Security Cutter program is a direct reflection of our strong partnership with the Coast Guard and the dedication and capability of a team of Ingalls shipbuilders that continues to successfully deliver some of the most challenging manufacturing projects in the world.”

“Over the last four years, we as a Coast Guard have interdicted 2 million pounds of illicit drugs,” Schultz said. “These modern cutters allow our nation to advance all of our national interests, and the success wouldn’t be possible without the partnership that we find right here in Pascagoula with HII.”

“We are here with a company, Ingalls Shipbuilding, that believes in its more than 11,000 workers, invests in state-of-the-art safety methods and has a corporate philosophy that relies on its own workers to develop better productivity techniques,” Wicker said. “When we see the capabilities of our Coast Guard today, we are amazed and truly impressed that we stand on the shoulders of Elmer Stone. We are gleaming and beaming today and we are glad to honor the memory of this great American.”

The Legend-class NSC is the largest, most technologically advanced ship in the Coast Guard’s fleet which enables it to meet the high demands required for maritime and homeland security, law enforcement, marine safety, environmental protection and national defense missions. NSCs are 418 feet long with a top speed of 28 knots, a range of 12,000 miles, an endurance of 60 days and a crew of 120. 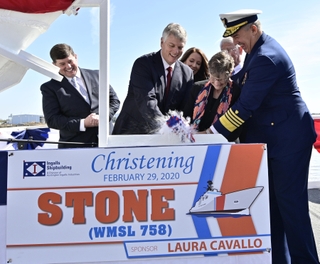