The new ship, designated DDG 95, will be officially christened James E. Williams to honor Boatswain's Mate First Class James Elliot Williams (1930-1999). He received the Congressional Medal of Honor for bravery and leadership in 1966 while serving as patrol commander of River Patrol Boat 105 on the Mekong River during the Vietnam War.

Williams' widow, Mrs. Elaine Weaver Williams, of Darlington, S.C., is Ship's Sponsor for DDG 95, and will splash a traditional bottle of champagne across the ship's bow to christen the vessel at the pinnacle of a ceremony to be held at Ingalls Operations on the west bank of the Pascagoula River.

On Oct. 31, 1966, Williams' River Patrol Boat, along with another boat, was searching for Viet Cong guerillas operating in an isolated area of the Mekong Delta River. While searching, they spotted two fast speedboats crossing in front of them. As those two boats split, Williams pursued one and sank it, then turned around to go after the other boat. The boat was hiding in an eight-foot canal and Williams knew his boat wouldn't fit. He looked at a map and found a wider canal to use to intercept the boat. When he maneuvered towards this canal, he and his crew found themselves under heavy fire from enemy boats and shore batteries. Williams and his crew shot back and continued a fierce battle for more than three hours before U.S. helicopter support arrived.

By this time, Williams' patrol had accounted for the destruction or loss of 65 enemy boats and more than 1,000 enemy troops.

Williams retired from the Navy in 1967, and was appointed as U.S. Marshal for the District of South Carolina in 1969.

James E. Williams is the 45th ship in the DDG 51 Arleigh Burke-class of Aegis guided missile destroyers -- the Navy's most powerful destroyer fleet. These highly capable, multimission surface combatants can conduct a variety of operations, from peacetime presence and crisis management to sea control and power projection.

DDG 95 is the 21st Aegis destroyer to be christened of 28 ships under contract to Ship Systems.

Construction of James E. Williams began July 30, 2001, and DDG 95's keel was laid July 15, 2002. Upon completion of outfitting, as well as dockside and at-sea testing and crew training, DDG 95 will be commissioned USS James E. Williams for Atlantic Fleet duty in early 2004.

Cmdr. Philip W. Vance, U.S. Navy, a native of Philadelphia, Pa., and a 1986 graduate of the U.S. Naval Academy, is the new ship's Prospective Commanding Officer.

Northrop Grumman's Ship Systems sector includes primary operations in Pascagoula and Gulfport, Miss.; New Orleans and Tallulah, La.; as well as a network of fleet support offices in the U.S. and Japan. The sector, which currently employs more than 18,000 shipbuilding professionals, primarily in Mississippi and Louisiana, is one of the nation's leading full service systems companies for the design, engineering, construction, and life cycle support of major surface ships for the U.S. Navy, U.S. Coast Guard and international navies, and for commercial vessels of all types. 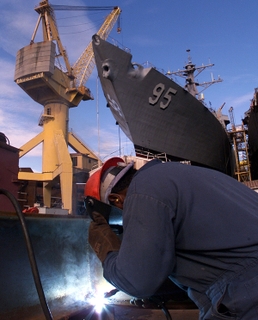