A photo accompanying this news release is available at: http://media.globenewswire.com/noc/

A video accompanying this news release is available at: http://www.sb.northropgrumman.com/media/video/assets/2009/lpd21_384k.wmv

"This ship is a symbol of American patriotism at its finest, not only for the steel in the bow stem cutting through the water, but also for the committed shipbuilders who constructed her with a focus on quality," Tim Farrell, vice president and program manager, LPD program, Northrop Grumman Shipbuilding - Gulf Coast.

"This ship will perform many different missions for our sailors and Marines and our shipbuilding workforce continues to instill their sense of pride into every part of this ship. We understand how sending this ship to the Fleet honors the heroes and victims of that terrible day in our Nation's history."

"I've been very pleased across the board with everything I've seen on this builder's trials," said U.S. Navy Cmdr. F. Curtis Jones of Binghamton, N.Y., the prospective commanding officer of the ship who will lead the crew of 360 officers and enlisted personnel.

"It's a huge undertaking and the level of effort, pride and attention to detail by the shipbuilders is extraordinarily apparent. Between the individual crafts and all the workers, it's clear a lot of extra hard work went into getting the ship to this point. I'm very excited and happy with the way the ship has performed. I'm looking forward to being able to call this ship our own."

The 684-foot, 105-foot-wide LPD transport dock ships are used to transport and land U.S. Marines, their equipment and supplies by embarked air cushioned or conventional landing craft, expeditionary fighting vehicles, amphibious assault vehicles, helicopters, and vertical take off and landing aircraft such as the Osprey. The ships will support amphibious assault special operations, or expeditionary warfare missions throughout the first half of the 21st century. 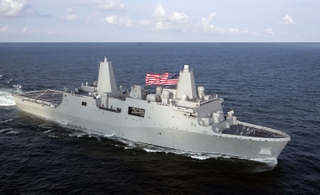