The module that comprises the torpedo room for North Dakota (SSN 784) was loaded onto the sea shuttle, which is used for the two-plus-day voyage to Electric Boat's main shipyard in Groton, Conn. Right behind it was the module containing the auxiliary machine room (AMR) for John Warner (SSN 785), which is headed to Electric Boat's fabrication plant in Quonset Point, R.I. The AMR, which departed on a commercial barge, comprises machinery such as a back-up diesel generator, pumps, motors and other electrical equipment.

This use of the commercial barge also represented the first time two major modules were being moved simultaneously between Virginia and southern New England.

"These shipments represent the 99th and 100th barge shipments between Electric Boat and Newport News Shipbuilding," said Jim Hughes, NNS' vice president, Submarines and Fleet Support. "It's satisfying to see these units being exchanged at such a remarkable pace, and we look forward to turning the final products over to the U.S. Navy."

In addition to these 100 shipments, General Dynamics Electric Boat has made about 900 shipments between its Groton and Quonset Point facilities using its sea shuttle barge, said Kurt A. Hesch, Electric Boat's vice president for the Virginia program.

"Barge shipments help make modular construction possible," Hesch said. "Without this, heavy lift capability shipments would have to be much smaller, much more assembly would have to be done at the delivery yard, and there would be a corresponding loss of efficiency."

HII is teamed with Electric Boat, a business unit of General Dynamics (NYSE:GD), to build Virginia-class submarines. Using millions of parts from more than 4,000 suppliers in 50 states and the District of Columbia, the submarines incorporate dozens of new technologies and innovations and are the first major combatants designed with the post-Cold War security environment in mind. 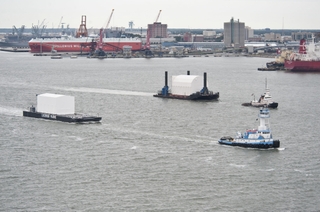