Armada Hoffler, the City of Newport News, the Commonwealth of Virginia and NNS have partnered on the project, which will include an 80,000-square-foot school, workforce housing, retail space and a parking garage. The campus will be located between 31st and 34th streets, bordered by Washington and West avenues.

"Looking out across this technologically advanced shipyard — the only place in America where our nation's aircraft carriers are assembled, and home to commercial and military shipbuilding facilities rivaled by none — it is clear that America's long history of innovation and advanced manufacturing is still alive and well," said Gov. McDonnell. "The skills needed to create these engineering marvels cannot be learned haphazardly or in your average technical training program. Virginia is proud to partner with the company to create this new campus to house their program. This facility will provide a fertile ground to cultivate the skills and trades necessary to build the ships of today and tomorrow."

More than 100 faculty and staff teach 25 different programs and more than 75 course offerings at The Apprentice School. Since 1919, the programs have produced more than 9,600 graduates in support of NNS's operational needs. An apprenticeship is a formal training program that allows students to receive instruction and experience — both theoretical and practical — in the various aspects of a skilled trade.

"This project is a demonstration of HII's commitment to education and investing in our people," said HII President and CEO Mike Petters. "Make no mistake, we believe this commitment to workforce development is necessary because what we do as a heavy manufacturing company — the products we build and the services we provide — is a direct result of the skills, talent and capability of our 38,000 employees."

NNS President Matt Mulherin said, "This campus will provide a first-class learning facility for our apprentices, while also providing another significant step toward revitalizing downtown Newport News. It is yet another symbol that American manufacturing is alive and well in Newport News. Without the support of an engaged state and city — and its leadership — a large, industrial organization such as ours would not flourish. We appreciate the long-standing support and partnership the City of Newport News and the Commonwealth of Virginia have always shown us."

The Apprentice School attracts an average of 4,500 applicants per year for 280 openings. The school offers four- and five-year, tuition-free apprenticeships in 25 occupations to qualified men and women. Apprentices work a regular 40-hour week and are paid for all work, including time spent in academic classes. Through partnerships with Thomas Nelson Community College and Tidewater Community College, The Apprentice School's academic program provides the opportunity to earn associate's degrees in business administration, engineering and engineering technology.

"Our national defense depends on our Navy," said U.S. Rep. Scott, "and the work product of the graduates of The Apprentice School will serve as the backbone of the United States Navy. We all look forward to the growth and progress of the apprentice program and the impact that the apprentices will have on the future of shipbuilding and our nation."

Mayor Price said The Apprentice School project "represents a partnership of organizations which embraces the values of generations of citizens in Newport News and throughout the Hampton Roads region—quality education, superior work ethic and an exceptional quality of life." "We are proud to be the home of The Apprentice School and to have played a role in an endeavor which will create opportunities for years to come," he said.

Lou Haddad, president and CEO of Armada Hoffler Holding Co., also spoke. "Only through a public-private partnership between the Commonwealth of Virginia, the City of Newport News and Huntington Ingalls Industries could the targeted grant from the commonwealth for the purpose of building a new apprentice school be transformed into a major downtown redevelopment complex," he said. "The school, along with the accompanying workforce housing, retail services and other conveniences, will serve as a catalyst for further downtown revitalization." 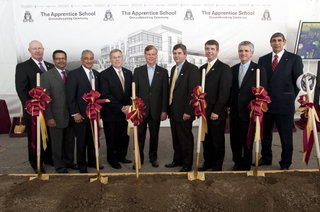