"Though we're no longer building tugboats here along the banks of the James River, we still feel that same sense of pride and ownership for our modern-day tugs as if we had built them ourselves, and it's why we name them for shipbuilding legends," said Matt Mulherin, HII corporate vice president and president of Newport News Shipbuilding."Our tugboats, their captains and crews, and the work they perform are vitally important to the work we do for the U.S. Navy. They push, pull, navigate and turn the largest and most complex nuclear-powered ships in the world, and they make it look effortless, even though we all know it requires skill, experience and hard work."

Capt. Ambrose was hired by the shipyard in March 1929 as a deck hand. The Mathews County native was a member of the original crew on Huntington, a tugboat that was placed in service on Nov. 18, 1933. Capt. Ambrose eventually became tugboat master on Huntington, a position he held along with his responsibilities as docking pilot until his retirement. It is estimated that Huntington, under Capt. Ambrose's leadership, assisted 30,000 vessels during her service.

"I am really honored to have been chosen for this great opportunity to christen this beautiful tug," Langston said. "What an honor this is for almost 53 years with the shipyard. The tugs here in Newport News Shipbuilding play a major role when it comes to getting our ships out of the dry docks and the piers." 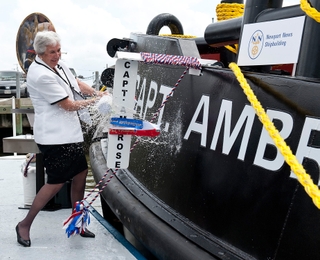