Ron Murray, NNS' vice president of quality and process excellence, presented the house keys to Shereen Wynder and her daughters, Shakira and Treasure.

"While this house was built by the hands of shipbuilders, it will be filled with the heart of the Wynder family and the many people who have volunteered their time leading to the construction of this beautiful home," Murray said.

Also participating in the dedication ceremony were Habitat for Humanity Board of Directors President David L. Hancock, Hampton Redevelopment and Housing Authority Board Commissioner Steve Brown and other city and business leaders.

A team of NNS volunteers began building the 1,400-square-foot, three-bedroom, two-bathroom house in Hampton in January.

"I am so excited to finally own my home," Shereen Wynder said. "I am actually looking forward to paying a mortgage instead of paying rent." 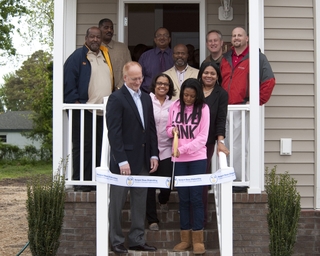