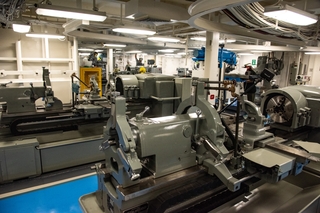 Newport News Shipbuilding division is progressing through construction of the aircraft carrier John F. Kennedy (CVN 79) turning over more than 500 of the total 2,615 compartments, including the machine room which is one of the larger spaces. The completed spaces allow sailors to begin training on the ship while final outfitting and testing continues.

The most recently completed spaces include berthing, machinery and electrical. This allows sailors assigned to the pre-commissioning unit to continue training on the ship while final outfitting and testing progresses.

“We are pleased with the progress being made on Kennedy,” said Lucas Hicks, vice president of the Gerald R. Ford (CVN 78) and John F. Kennedy (CVN 79) aircraft carrier programs. “We are in the very early stages of systems testing, and look forward to successfully executing our work on equipment, systems and compartments that brings us closer to delivering the ship to the fleet.”

Kennedy is more than 80% complete overall, and is scheduled to be delivered to the Navy in 2024.