NEWPORT NEWS, Va., April 27, 2012 (GLOBE NEWSWIRE) -- Huntington Ingalls Industries (NYSE:HII) announced that its Newport News Shipbuilding (NNS) division honored 720 shipbuilders last night for 40 or more years of continuous service to the shipyard. The largest group ever to be inducted was recognized during a banquet held at the Hampton Roads Convention Center.

"Your combined 30,762 years of service, knowledge and experience is the foundation that supports and maintains our tradition of 'Always Good Ships,'" said NNS President Matt Mulherin. "We are so fortunate to have your guidance and leadership as we bring on a new generation of shipbuilders to carry on that legacy."

Martha Stevens, who works with the pipefitting and machinist trades, was among the shipbuilders inducted. She is still stunned that 40 years have gone by so fast. "Look at where the carriers are; look at where the subs go," she said. "It's a source of pride, and it should be a source of pride for everyone who works here, that they contributed in some way to building an aircraft carrier, even ones that were delivered 25 and 30 years ago, that are still out there and are very visible." 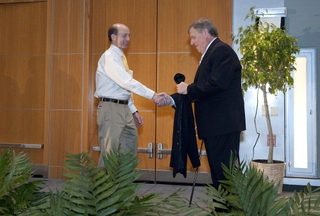