Ellen Roughead, Minnesota native and wife of Chief of Naval Operations Adm. Gary Roughead, is the ship's sponsor and served as the keel authenticator for the ceremony. She authenticated the keel by chalking her initials onto a metal plate. Her initials were then welded onto the plate, which will be permanently affixed to the ship.

Minnesota will be the 10th of a projected 30 Virginia-class submarines. Construction began in February 2008. The submarine is approximately 60 percent complete and on schedule to complete in 65 months—10 months ahead of contract.

"While Mrs. Roughead's initials may be the only ones visible today, I can tell you that Minnesota will also carry with her the names of the shipbuilders—the thousands of men and women who will have a hand in her construction," Mulherin said of Newport News' workforce. "They symbolically sign their names to every job they perform—to every inch of cable, every piece of pipe, every weld, every plate of steel. For 125 years, generations of Newport News shipbuilders have demonstrated this same sense of pride and ownership for the more than 800 ships we've built."

"In-service these ships are delivering operational performance that has been nothing less than eye-watering," said Rear Adm. David Johnson, program executive officer for submarines, making reference to the Virginia class of submarines.

The name Minnesota was selected to honor the state's residents and their continued support of the U.S. military. The state is home to 46 Medal of Honor recipients that span from the Civil War to the Vietnam War. 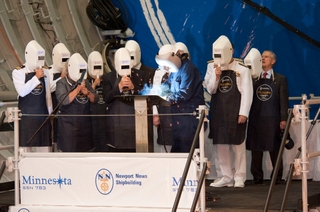 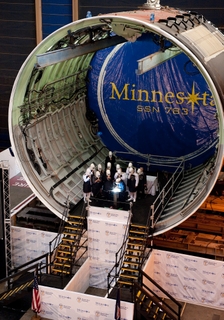