Bales received a briefing on Gerald R. Ford's (CVN 78) construction progress since her last visit in August 2010. Following the briefing, Bales toured Ford with shipyard leadership, ascended NNS' 1,050-metric ton crane to get a bird's-eye view of the shipyard, and had lunch with CVN 78 shipbuilders.

"It has been more than a year since my last visit, and the ship has changed immensely," Bales said. "Every day it becomes a more important part of my family, especially with the loss of my mother. It's one more way to continue my father's legacy so people will understand who he was and what he was about." 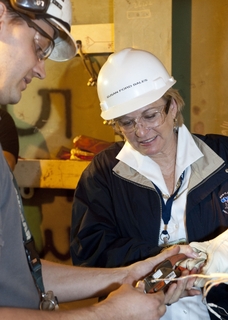