NEWPORT NEWS, Va., Aug. 9, 2013 (GLOBE NEWSWIRE) -- Newport News Shipbuilding (NNS), a division of Huntington Ingalls Industries (NYSE:HII), is partnering with the City of Hampton to convert shipyard trash into steam power. As part of the new Single Stream Recycling Program, the shipyard's solid waste is incinerated at Hampton's award-winning steam plant facility and converted to steam through a process known as "waste-to-energy." The energy is then used to power NASA Langley Research Center (NASA LaRC) facilities.

"Just last year NNS sent more than 10,000 tons of non-recyclable waste to the local landfill," said Frank "Hogie" Thorn, NNS' environmental engineering manager. "This program will significantly decrease the amount of waste we send to the landfill and will also make recycling for employees more convenient."

Using energy generated by the steam, NASA will be able to continue its research and conserve fossil fuels while NNS saves space in landfills where garbage could have gone, thus reducing its carbon footprint. By providing its trash for steam power, NNS has contributed 70 percent of the total pounds of trash taken in by the plant to help support its operations. In 2012 alone, the Hampton/NASA Steam Plant exported more than 317 million pounds of steam to power NASA's facilities.

The steam plant has been converting local trash into energy for 33 years. With partnerships with the cities of Hampton and Poquoson, all local federal agencies, and commercial groups like NNS, Hampton's steam plant burns up to 240 tons of trash per day. The chemically inert residue from the process amounts to about 30 tons of trash per day—greatly extending the life of the landfill and ensuring there are no harmful side effects.

"Back in the 1970s NASA needed a more efficient and practical way to get power for its buildings and wind tunnels, and during this time 'waste-to-burn' energy was coming into its own," said Hampton/NASA Steam Plant Manager John MacDonald. "So NASA LaRC, as a forerunner in science, got involved and has been doing it ever since. The energy produced by steam helps with heating and air conditioning of NASA buildings and cooking in NASA's commissary. The biggest use of the energy is for the air ejectors in NASA's wind tunnels to continue the agency's research."

The partnership between the city of Hampton, NASA LaRC and NNS is just one project led by GreeNN, NNS' program dedicated to pursing environmental improvements throughout the shipyard. The project is the latest in the group's Go Green Challenge, a long-term plan for environmental responsibility at NNS.

"We truly appreciate employees who have participated in GreeNN's 'Go Green Challenge' over the past several years," said Dru Branche, NNS' environmental, health and safety director. "The challenge was a steppingstone to a more aggressive and leaner recycling process. NNS will continue to support employees who still want to collect these types of materials on their own for their favorite charity or non-profit organization." 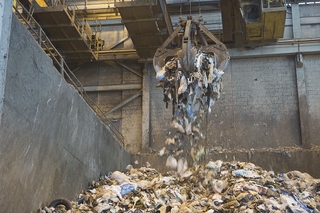