"We are honored to have been selected for this award, and we are proud to have supported the Virginia Living Museum for more than 30 years," said Ken Mahler, NNS' vice president of Navy Programs. "We are grateful for the awareness, outreach and education that the museum provides that is so important to the well-being of our community."

The Golden Paw Award was created in 1995 to recognize outstanding service and support of the museum. NNS has partnered with the museum for more than three decades by providing financial and leadership support.

"This award recognizes significant and lasting contributions through time, talent and inspiration, and Newport News Shipbuilding has been an outstanding partner in every way," said Virginia Living Museum Executive Director Page Hayhurst. "From volunteers helping to mitigate the sound of our aquarium pumps, to craftsmen who created a work of art out of steel for our museum gates and the many board members who have shaped the museum's strategic direction, Newport News Shipbuilding has been an integral supporter of the museum for many years." 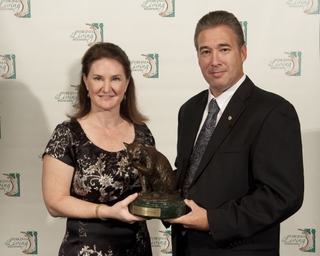