The "Memorial Mural," once on display in The Apprentice School's administration and classroom building, has served as a reminder of the men and women who not only built ships for the Navy but also served as sailors and soldiers themselves. Skinner's mural is being restored to its original vibrancy at The Mariners' Museum before claiming its home in The Apprentice School's new facility, which is currently under construction. NNS, a division of Huntington Ingalls Industries (NYSE:HII), plans to make the artwork a focal point at the school's new state-of-the-art campus scheduled to open this fall.

Made up of multiple panels to measure in at nearly 23 feet long and 6 feet high, the "Memorial Mural" lists the 28 names of apprentices who died in the war. The mural has been on display in the original 1943 Apprentice School building since its completion in 1947. The panels, depicting battle scenes and a soldier mourning a flag-covered coffin, also show apprentice William A. "Bud" Cole holding a draft notice and looking out into the shipyard.

Working with Cole to capture the loss and emotion felt during World War II, Thomas Skinner acted as NNS' in-house artist, complete with a studio in the yard. First enlisted during the 1930s by his brother-in-law, NNS President Homer L. Ferguson, Skinner produced numerous paintings and sketches that captured the energy and production of both shipbuilders and machines. Many of his works were featured in shipyard ceremony programs and The Apprentice School's publications.

"The conservation and restoration work being done at The Mariners' Museum will restore the mural's vibrant colors and ensure that it will be well displayed for many years to come in our new facility," said Jim Hughes, a training manager at The Apprentice School. "We're looking forward to having it on display once again as a memorial to those 28 apprentices who paid the ultimate price for freedom." 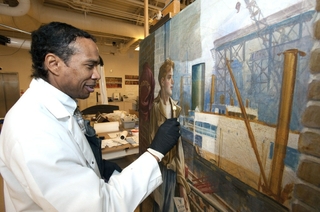