NEWPORT NEWS, Va., Sept. 14, 2006 (PRIMEZONE) -- Northrop Grumman (NYSE:NOC) reached an important construction milestone on August 31 when it completed the final hull welds of the Virginia-class submarine North Carolina (SSN 777). This accomplishment, known as "pressure hull complete," signifies the hull sections being joined to form a single unit. It is the last major milestone before the ship's christening next spring.

"This is a giant step on the path to deliver North Carolina," said Becky Stewart, vice president of the submarine program for Northrop Grumman's Newport News sector. "She's starting to come together and look like a submarine now, which is a testament to our shipbuilders and their commitment to not only producing a high-quality product, but to their tireless efforts to improve processes and results along the way."

Northrop Grumman is building "North Carolina," the fourth ship of the Virginia-class, using lessons learned from the previous three ships of the class. It is currently 76 percent complete and is on track to deliver in February 2008.

"Today signifies the completion of the pressure hull complete -- joining all the modules together, more or less bringing the ship alive, giving it a personality," Love said. "Now she looks like a boat."

Northrop Grumman is teamed with General Dynamics Electric Boat to build the first 10 ships of the Virginia class. Current plans call for 30 Virginia-class submarines in the fleet. Designed to meet the Navy's requirements in a post-Cold War security environment, the submarines use advanced technologies to increase firepower, maneuverability and stealth. The 377-foot long submarines are capable of submerged speeds of more than 25 knots and can stay submerged for months at a time.

The keel for North Carolina was laid on May 22, 2004. Upon delivery to the Navy in early 2008, it will be the most modern and sophisticated attack submarine in the world, providing undersea supremacy well into the 21st century. 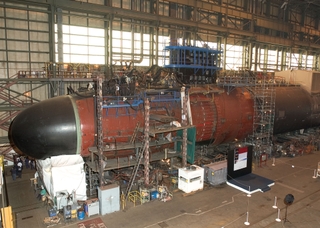