NEWPORT NEWS, Va., Aug. 20, 2008 (GLOBE NEWSWIRE) -- Northrop Grumman Corporation (NYSE:NOC) reached significant milestones in the lives of two aircraft carriers at the company's Shipbuilding sector. On Aug. 11, the crew began moving aboard and served the first meal on the nation's newest Nimitz-class carrier, George H.W. Bush (CVN 77). One week later, on Aug. 18, the USS Carl Vinson (CVN 70) celebrated the same milestone. This was the first meal served aboard USS Carl Vinson in nearly three years since it arrived in Newport News for its refueling and complex overhaul.

Videos accompanying this release are available at:

"These milestones are particularly significant and unique for us as they mark the first time in our history that we've had two aircraft carrier programs celebrate this accomplishment within a week of each other," said Ken Mahler, vice president of Navy programs for Northrop Grumman Shipbuilding-Newport News. "Our great shipbuilders have worked for many years to reach this point, and they achieved these milestones on schedule through close team work and partnership with the Navy. It's a significant achievement for both the Bush and Vinson teams, and represents a major step toward bringing these ships to life."

"For the crew to be able to come aboard, eat aboard, hear the ship's intercom announcements, present colors, muster in the hangar bay and accept their berthing assignments is a sign that we're that much closer to being USS George H.W. Bush, and it sends a message to the crew that we're moving forward," said Jon Port, command master chief of George H.W. Bush.

"It's an exciting day for our sailors, especially for those who've never seen sea duty," said Glenn Mallo, command master chief of USS Carl Vinson. "Crew move aboard is an important event that represents the turning point from shipyard life to shipboard life."

George H.W. Bush is in the final stages of construction at the company's Shipbuilding sector in Newport News, the only shipyard capable of designing and building nuclear-powered aircraft carriers. Bush is the nation's tenth and final Nimitz-class aircraft carrier and will be delivered to the Navy at the end of this year. 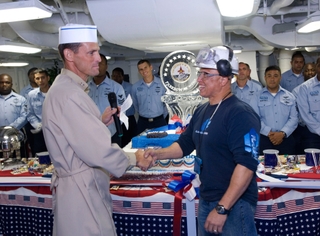