NEWPORT NEWS, Va., Oct. 27, 2005 (PRIMEZONE) -- Northrop Grumman Corporation (NYSE:NOC) and the United Steelworkers of America (Local 8888) participated in a wall-raising ceremony Oct. 19 to kick-off construction of their fourth Habitat for Humanity house. Habitat for Humanity builds simple and affordable houses in partnership with those in need of adequate shelter.

The house, which is being called "Labor Management House 4," will be constructed by volunteer shipbuilders from Northrop Grumman's Newport News sector and is expected to be completed early next year.

"Our shipbuilders make financial donations to many organizations in the community," said Bill Ermatinger, vice president of Human Resources and Administration for Northrop Grumman Newport News. "But the volunteers with this project donate a lot more than dollars, they give their precious time."

Representatives from Northrop Grumman Newport News, the Steelworkers Union, Peninsula Habitat for Humanity and the future homeowner, Juanita Wright, participated in the ceremony.

The building lot is located on Wolf Trap Road in Yorktown, Va. and was donated by Wright. 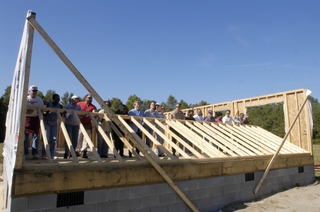 Northrop Grumman Newport News and the United Steelworkers of America raised the wall on their fourth Habitat for Humanity house
View | Download (410.7 kB)