A photo accompanying this release is available at: http://media.globenewswire.com/noc/mediagallery.html?pkgid=6316

The funds will be used to purchase long lead time materials and major equipment in support of the new ship, such as main engines and diesel generators and other equipment including electrical switchboards, deck equipment and fire extinguishing systems.

The work will be performed at the company's Gulf Coast facilities. This is the second advance procurement contract for LPD 26.

"Northrop Grumman Shipbuilders are committed to building a high quality ship -- the 10th in this strong class of amphibs for the U.S. Navy," said Tim Farrell, vice president and program manager of the LPD program for Northrop Grumman Shipbuilding–Gulf Coast. "This procurement contract enables us to continue our focus on effective and efficient supply chain management through the advanced purchase of essential material that will help us meet our schedule commitments with our Navy customer."

The ten ships of the LPD 17 class are a key element of the Navy's ability to project power ashore. Collectively, these ships functionally replace over 41 ships (LPD 4, LSD 36, LKA 113, and LST 1179 classes of amphibious ships) providing the Navy and Marine Corps with modern, sea-based platforms that are networked, survivable, and built to operate with 21st Century platforms, such as the MV-22 Osprey and the Expeditionary Fighting Vehicle (EFV).

The LPD 17-class ships are 684 feet long, 105 feet wide and displace approximately 25,000 tons. Their principal mission is to deploy the combat and support elements of Marine Expeditionary Units and Brigades. The ship can carry up to 800 troops and have the capability of transporting and debarking air cushion (LCAC) or conventional landing craft and EFVs, augmented by helicopters or vertical take-off and landing aircraft such as the MV-22. These ships will support amphibious assault, special operations, or expeditionary warfare missions through the first half of the 21st Century. 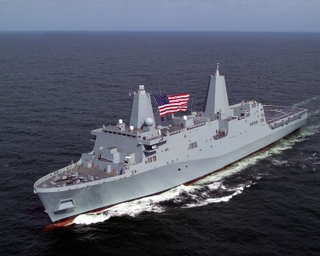