"There could be nothing more exciting to me than to be a part of this ship," said Lynne Pace, ship sponsor for America and wife of retired U.S. Marine Corps Gen. Peter Pace, former Chairman of the Joint Chiefs of Staff.

In step with Navy and maritime tradition, Mrs. Pace had her initials welded onto a ceremonial steel plate noting the ship's keel had been "truly and fairly laid."

"Today I'd like to thank the Northrop Grumman shipbuilders who will put their heart and soul into building this ship and making it the best in the world," she continued. "You have incredible talents, skills and craftsmanship that are needed to build the tools to help keep our country safe. For your dedication and patriotism, I thank you."

LHA 6, the fourth U.S. Navy ship to bear the name America, replaces the aging Tarawa-class and represents a conscious decision to increase the aviation capacity of future big deck amphibious ships in order to maximize the Navy's investment in future aircraft.

"I can think of no more fitting place or time to celebrate this new ship and all she represents on the heels of our nation's 233rd birthday in a city and a shipyard that strongly reflect the values of this great nation," said Art Divens, executive director for Amphibious & Auxiliary Ships and Craft, executive director for Program Executive Office, Ships.

"Today's ceremony is especially noteworthy, for not only are we acknowledging a critical milestone in the Navy's newest ship of the line, but we are also celebrating a monumental leap forward in the strength, capability and flexibility of the Navy's amphibious fleet," Divens continued. "This ship can go in harm's way to project combat power ashore and is perfectly suited to support humanitarian assistance and other contingency missions on a moment's notice."

"LHA 6 will be built by the best shipbuilders in the world," said Irwin F. Edenzon, sector vice president and general manager of Northrop Grumman Shipbuilding - Gulf Coast. "It will be built by thousands of Northrop Grumman men and women who are proud to be shipbuilders. We work everyday to design and build quality ships. The Sailors and Marines who sail in them and protect our nation's freedom deserve nothing less."

"America will carry her finest into harm's way, and her ability to return them safely will depend directly on the extraordinary efforts of this Gulf Coast shipyard," said U.S. Navy Capt. Robert Howell, executive officer and director of contracts, Supervisor of Shipbuilding, Gulf Coast.

"To the men and women of Northrop Grumman, whether you realize it or not, you proudly wear the cloth of this great nation. Your uniform of denim and coveralls, often covered in soot and dust after a long day at the shipyard, represent a level of commitment that few will ever truly understand. The sweat from your brow from the long hours in the heat is the sacrifice you make so that your Navy and Marine Corps brothers and sisters will be less likely to bleed in conflict.

"Never let it be forgotten that it is your deft hands and skilled craftsmanship that are the key enablers to keeping the Global War on Terrorism from our shores," Capt. Howell added.

America will have an extended hangar deck with two higher hangar bay areas, each fitted with an overhead crane for aircraft maintenance. The ship will also provide increased aviation fuel capacity, stowage for aviation parts and support equipment. In addition, America will be able to embark and launch the MV-22 Osprey tilt-rotor aircraft, cargo and attack helicopters, the AV-8B Harrier and the short take-off vertical landing (STOVL) variant F-35B Lightning II Strike Fighter. 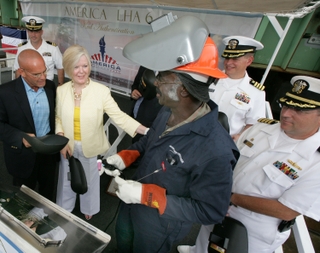