The work will be performed by the company's Newport News sector and will include the refueling of the ship's reactors, as well as extensive modernization work to more than 2,300 compartments and hundreds of systems. In addition, nearly 3,000 valves will be replaced and another 600 will be overhauled in various ship systems. Major upgrades will be made to the flight deck, catapults, combat systems and the island. The top two levels of the island will be removed and replaced with a reconfigured structure to provide enhanced operability and support a new antenna mast designed for more modern sensors.

"This project is very large and complex, and requires a tremendous Newport News and Navy team effort," said Ken Mahler, vice president of aircraft carrier overhauls for Northrop Grumman Newport News. "We'll touch almost every piece of the ship, refurbishing existing equipment and installing the latest advancements in technology to increase and modernize Vinson's capabilities and mission effectiveness when she returns to the fleet for another 23 years of service."

Work is scheduled to last more than three years and will be the ship's one and only refueling and complex overhaul in a 50-year life span. Vinson is the third ship of the Nimitz class to undergo this major life-cycle milestone. The ship arrived at the company's Newport News sector on Nov. 11. More than 3,500 Northrop Grumman Newport News employees will be working aboard Vinson during peak periods of the project.

Named for former U.S. Rep. Carl Vinson, the carrier Vinson was built at Northrop Grumman Newport News and christened in 1980. The congressman attended the christening ceremony at age 96 and became the first living American to have a Navy ship named in his honor. The ship was commissioned by the Navy in 1982. 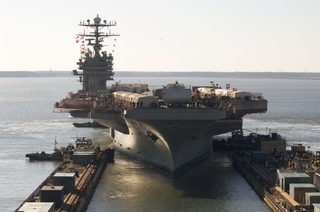