This work follows more than a year of advance planning efforts conducted under the contract awarded in Dec. 2003. Northrop Grumman's Newport News sector is the prime contractor for this award.

"We've worked closely with the Navy and Navy shipyards during the planning stage of this project to develop best practices that will help us now as we begin the maintenance period," said Bob Gunter, senior vice president of the Aircraft Carrier Program at Northrop Grumman Newport News. "This collaboration has laid the groundwork for a successful partnership and a successful availability."

The George Washington arrived at the Newport News shipyard on Jan. 27 for a 10-and-a-half month maintenance availability, which will include dry-docking for approximately seven months. Work will include repair and refurbishment of the hull, sea chests, shafting, propellers and rudders; blasting and coating of numerous tanks; modernization of spaces to support the F/A-18 Super Hornet aircraft equipment and weapons stowage systems; enhancements to crew living areas; scheduled maintenance on propulsion plant systems and repair and inspections on a variety of ship systems.

Launched in 1990 and delivered to the Navy in 1992, the George Washington is the sixth nuclear-powered Nimitz-class aircraft carrier built by Northrop Grumman Newport News. At 1,092 feet, with a flight deck width of 252 feet and a displacement of 97,000 tons, the George Washington can travel in excess of 30 knots. This is the first time the ship has returned to the Newport News shipyard since it was delivered more than 12 years ago. 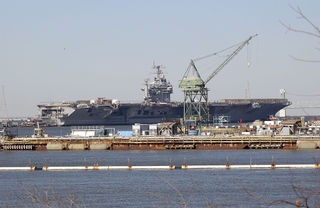