"This contract award is an important and historic milestone for our company, our Navy and our country," said Matt Mulherin, vice president and general manager for Northrop Grumman Shipbuilding's Newport News operations. "It represents an incredible opportunity for the great shipbuilders of Northrop Grumman Shipbuilding to build the first new aircraft carrier class in more than 40 years. The work we are doing today will play a significant role in America's defense for many generations to come."

Advance construction of the Gerald R. Ford began in 2005 under a separate contract valued at $2.7 billion. This advance work allowed shipbuilders to test the design-build strategy, exercise new processes, prototype new features used on this ship before the overall construction contract was awarded, and to build a sufficient backlog of ship units to support production, undocking and delivery. About one third of the ship's 1,200 structural units are currently under construction. The ship's keel will be laid in the fall of 2009 and delivery to the Navy is scheduled for 2015.

The Gerald R. Ford (CVN 78) class will continue the legacy of highly capable U.S. Navy aircraft carrier ship platforms. Enhancements being incorporated into the design include flight deck changes, improved weapons handling systems, and a redesigned island, all resulting in increased aircraft sortie rates. It will also include a new nuclear power plant; increased electrical power generation capacity; allowance for future technologies; and reduced workload for the sailors, translating to a smaller crew size and lower operating costs for the Navy. 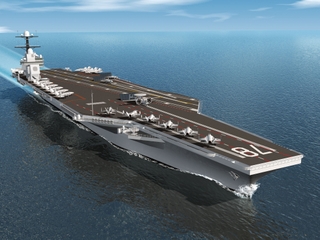