NEWPORT NEWS, Va., Nov. 30, 2006 (PRIME NEWSWIRE) -- Northrop Grumman Corporation (NYSE:NOC) received an $860.6 million contract modification to a previously awarded contract for continuation of work on the CVN 21 aircraft carrier program. The base contract modification is valued at approximately $754 million with an additional $106.7 million in options. This additional work brings the total value of the contract to $2.2 billion.

The company's Newport News sector will perform the work, which includes the continuation of ship design activities, procurement of long-lead time materials to support construction, and advanced construction work on select parts of the ship.

"We are making good progress on the design," said Mike Shawcross, vice president of the CVN 21 program for Northrop Grumman Newport News. "We're more than 50 percent complete with the overall design. This contract modification will carry us through 2007 to the next major milestone when we will establish the construction contract for the first ship in the class, CVN 78."

The CVN 78 class will be a more capable class of carriers. Enhancements being incorporated into the design include flight deck changes, improved weapons handling systems, and a redesigned island, resulting in increased sortie rates; a new nuclear power plant; increased electrical power generation capacity; allowance for future technologies and reduced workload for the sailors, translating to a smaller crew size and lower operating costs for the Navy. 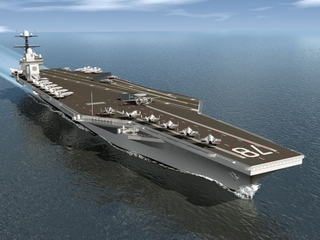