Northrop Grumman's Newport News sector is the prime contractor for the work, which will include dry-docking, maintenance and repair. The Phillips arrived at the shipyard on Sept. 26 and will remain for approximately five weeks. Work during this period will include upgrades to the habitability spaces; replacement of the cargo cranes; propeller and rudder maintenance; and underwater hull painting. The contract is valued at $9.49 million.

"This is an important opportunity for our fleet-support business," said Irwin F. Edenzon, vice president of technology development and fleet support at Northrop Grumman Newport News. "We haven't had a ship of this class under contract since 2001, and we're hopeful that our performance on Phillips and our commitment to providing cost-effective, high-quality maintenance and repairs will lead to similar opportunities in the future."

The M/V Pvt. Franklin J. Phillips is one of five military prepositioning ships owned and operated by Maersk Line, Limited under exclusive contact with the Military Sealift Command in support of the U.S. military's sealift requirements. These vessels provide transport and storage for rolling stock, containers and ammunition for the U.S. Army and U.S. Marine Corps. The Phillips was named for Medal of Honor recipient Pvt. Franklin J. Phillips who served in the U.S. Marine Corps and gave his life at the Battle of Peking, China in 1900. 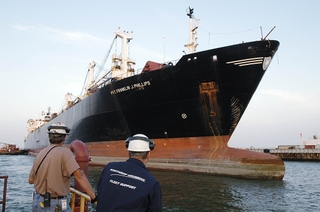