The contract is valued at $954,160. The work will be performed at the company's Newport News sector in Newport News, Va.

"This marks the first job we've contracted directly with the Military Sealift Command in nearly a decade," said Irwin F. Edenzon, sector vice president for Technology Development and Fleet Support. "This repair work will give us an opportunity to demonstrate our ability to respond quickly with the right resources and get the ship back to the fleet."

The Mount Baker arrived at the Newport News shipyard on Nov. 22 for approximately 16 days of maintenance work. Work will include repairs to the ship's rudder. The rudder and rudder stock will be removed, inspected, repaired and machined as necessary. Upon completion, the rudder will be tested and the ship will undergo a short sea trial.

USNS Mount Baker is one of Military Sealift Command's four active ammunition ships and is part of the 37 ships in the Naval Fleet Auxiliary Force. It provides logistic support to U.S. Navy ships at sea and replenishes all types of ammunition. Additionally, these ships frequently assist with the transfer of ammunition between weapons storage and maintenance facilities worldwide. 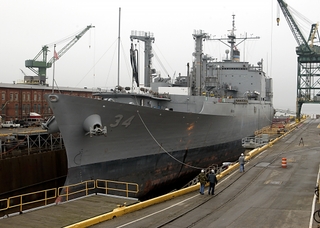