The company's Shipbuilding sector in Newport News, Va., is the prime contractor for the work, which is valued at just under $50 million. A PSA is a typical availability in the life of a carrier that allows the Navy and Northrop Grumman team to resolve any items that came up after the ship's recent Refueling and Complex Overhaul (RCOH) and to make additional upgrades.

Northrop Grumman Shipbuilding redelivered USS Carl Vinson to the Navy within budget on July 11, following a three and a half-year RCOH. The RCOH is performed only once in a carrier's 50-year life and includes extensive modernization work to more than 2,300 compartments, hundreds of system upgrades, and over 20 million man-hours of work, to include defueling and refueling the nuclear reactors.

"We look forward to working with the ship's crew to complete this planned work and make Vinson an active part of the fleet again," said Jim Hughes, Northrop Grumman Shipbuilding's vice president of aircraft carrier overhauls. "Newport News has been a continuous partner with the Navy on this ship for over 25 years and has had a particularly strong relationship with the crew during the recent RCOH. We are committed to work together with all involved Government activities to complete this project safely, on schedule and within budget."

Work during the PSA includes modernization of the ship's control and piping systems, replacement of the trash incinerator unit and boat and aircraft crane repairs. The work is scheduled to last several months.

Named for former U.S. Rep. Carl Vinson, the USS Carl Vinson (CVN 70) was built in Newport News, Va. by Northrop Grumman Shipbuilding and was christened in 1980. The congressman attended the christening ceremony at age 96 and became the first living American to have a Navy ship named in his honor. The ship was commissioned by the Navy in 1982. 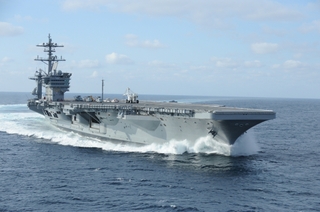