The company's Shipbuilding sector in Newport News, Va., is the prime contractor for the work, which is valued at $72.6 million. A PSA is a typical availability in the early life of a carrier that allows the Navy and Northrop Grumman team to resolve any items that came up during trials and delivery and make any last-minute changes and upgrades.

"We have worked closely with our Navy partners during the planning period, sharing lessons learned and best practices, and are ready to begin the execution period of this contract," said Mike Shawcross, vice president for Northrop Grumman Shipbuilding's aircraft carrier construction programs. "The Shipbuilding team looks forward to continuing our close working relationship with the officers and crew aboard USS George H. W. Bush."

Work includes the installation of a Rigid Hull Inflatable Boat (RHIB) handling system and a new fresh water purification system. Other changes include compartment reconfigurations, combat system and radar equipment upgrades, and minor repairs. The work is scheduled to last through early 2010. 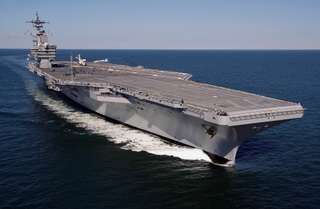