"This ship performed well and our shipbuilders deserve credit for a job well done," said Irwin F. Edenzon, vice president and general manager of Northrop Grumman Shipbuilding, Gulf Coast. "The Navy and Marine Corps will soon be getting another great asset when this ship enters the fleet."

Rigorous testing was performed on the ship's main propulsion, communications, steering, navigational, radar and other systems. Other exercises included anchor handling, flight operations, compartment air balancing and ballasting/de-ballasting of the well deck, where amphibious landing craft will be launched.

"This was a very successful trial," said U.S. Navy Capt. Beth Dexter, supervisor of shipbuilding, Gulf Coast. "The LPD 20 team can be rightfully proud of this ship. Thank you for all your hard work. The many hours away from home and family show your devotion to making this trial a success."

"I am extremely proud of the entire Navy and industry team who put forth such a significant effort in the construction and testing of Green Bay," said Bob Merchent, vice president of Northrop Grumman Shipbuilding, New Orleans operations. "Our team produced and put to sea the most complete and tested LPD-class ship for builders trials of any of her class. Well done to all who had a hand in building Green Bay."

Later this month, the U.S. Navy's Board of Inspection and Survey team will conduct acceptance trials aboard LPD 20, which will involve more rounds of extensive testing of the ship's major systems. Green Bay's mission is to embark, transport and land elements of a landing force in a variety of expeditionary and special operations missions.

Green Bay is an LPD 17-class ship. The ship is 208.4 meters (684 feet) long, 31.9 meters (105 feet) wide, and will replace the functions of the LPD 4, LSD 36, LKA 113, and LST 1179 classes of amphibious ships. This new ship class affords the Navy's Expeditionary Strike Group with the technology and flexibility to launch and recover amphibious landing craft such as the Landing Craft Air Cushion, operate an array of rotary-wing aircraft, as well as carry and launch the U.S. Marine Corps' Expeditionary Fighting Vehicle. 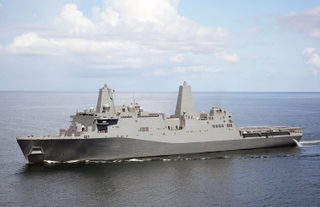