A photo illustration accompanying this release is available at http://media.primezone.com/noc/

The delivery of the ship was all the more remarkable because two days later, it became a safe harbor for the Navy and shipyard personnel who rode out Hurricane Gustav, which swept over the Gulf Coast early in the morning of Sept. 1. The shipyard personnel were aboard to support Navy crew and equipment, performing soundings and security watches and standing-by to provide damage control, if necessary.

"The SupShip Gulf Coast team is very proud of the ship USS Green Bay, and her delivery represents the culmination of years of hard work by the Navy/industry team," said Capt. Dexter. "After riding out Hurricane Gustav with the ship's crew, we feel like they have become a part of our family. The Sailors and Marines of USS Green Bay have shown us that they are motivated and capable. We have every confidence going forward that they will take this ship and make history. The men and women of SupShip, Gulf Coast, will follow them with our prayers wherever they sail."

"The LPD 17 class ship is a very stable platform," said Bob Merchent, vice president of Northrop Grumman Shipbuilding, New Orleans operations. "Even during the worst of wind gusts -- measuring up to 115 mph in some cases -- the ship rode smoothly. Our team produced and delivered to the Navy the most complete and thoroughly tested ship of the LPD 17 class. The ship and crew have been through their first test, and all I can say is well done to all who had a hand in building USS Green Bay."

"The majority of the workers who volunteered to stand watch at the shipyard went to USS Green Bay to ride out the hurricane," said Lou Hose, New Orleans emergency director. "The crew put us up in bunks, and took very good care of us. I was genuinely impressed with the crew -- they were young people who were motivated, polite and accommodating with a wonderful work ethic. Riding aboard LPD 20 is the best way to ride out a hurricane."

Earlier this month, the U.S. Navy's Board of Inspection and Survey team conducted rigorous acceptance trials aboard LPD 20, which involved rounds of extensive testing of the ship's major systems, including the ship's main propulsion, communications, steering, navigational, radar and all other systems. Other exercises included anchor handling, flight operations, compartment air balancing and ballasting/de-ballasting of the well deck, where amphibious landing craft will be launched. USS Green Bay's mission is to embark, transport and land elements of a landing force in a variety of expeditionary and special operations missions for the U.S. Marine Corps.

USS Green Bay is the fourth ship of the LPD 17 class ship to be delivered to the Navy. The ship is 208.4 meters (684 feet) long, 31.9 meters (105 feet) wide, and will replace the functions of the LPD 4, LSD 36, LKA 113, and LST 1179 classes of amphibious ships. This new ship class affords the Navy's Expeditionary Strike Group with the technology and flexibility to launch and recover amphibious landing craft such as the Landing Craft Air Cushion, operate an array of rotary-wing aircraft, as well as carry and launch the U.S. Marine Corps' Expeditionary Fighting Vehicle. 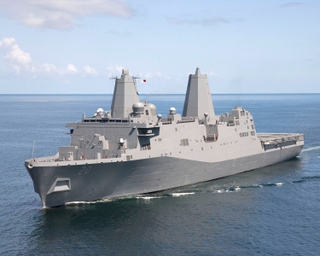