"We work every day to design and build quality ships," said Irwin F. Edenzon, vice president and general manager, Northrop Grumman Shipbuilding-Gulf Coast. "The Sailors and Marines who sail on them deserve the best we can give so they can protect our freedom and come home safely."

Named for the county in which the Pentagon is located, Arlington (LPD 24) is one of three ships NGSB-Gulf Coast is building to honor the heroes and victims of the Sept. 11, 2001 terrorist attacks. On that day, 184 people were killed in the Pentagon.

"Building Arlington allows us to honor those who perished on 9/11 and the heroes who came to the aid of the victims," Edenzon added.

"Through her name, Arlington will ensure that we never forget the heroes of 9/11," Landay said. "And through her unprecedented power and might, she will ensure that our enemies know first-hand the indomitable spirit of the American people and our commitment to root out terrorism now and forever. She is and will always be a special ship."

Landay also commended the Northrop Grumman shipbuilders, saying, "I can think of no better group of patriots to entrust the care and construction of our nation's newest amphibious ship and the spirit that is Arlington than the people of this shipyard."

Ron Carlee, county manager of Arlington County, Va., officially authenticated the keel. His initials were welded onto a plaque that will be permanently affixed to the ship. "Memorializing this event by having a ship named for Arlington is a high honor," he said. "It is a tribute to the men and women who lost their lives in the Pentagon."

Herb Wolk, whose son-in-law, U.S. Navy Lt. Darin Pontell, was killed in the 9/11 attack on the Pentagon, presented a stained glass replica of the ship's seal that he created to Captain Mary Dexter, U.S. Navy, supervisor of Shipbuilding, Gulf Coast. Dexter accepted the seal on behalf of the future crew of Arlington.

"The seal is a small token of appreciation from my family for the Navy's naming of Arlington in memory of a lost loved one on that horrific day at the Pentagon," Wolk said.

LPD 24 is the third U.S. Navy ship to bear the name Arlington. The 684-foot-long, 105-foot-wide LPD 17-class transport dock ships are used to transport and land U.S. Marines, their equipment and supplies by embarked air cushion or conventional landing craft and expeditionary fighting vehicles, augmented by helicopters or vertical take off and landing aircraft such as the Osprey. The ships will support amphibious assault special operations, or expeditionary warfare missions throughout the first half of the 21st century. 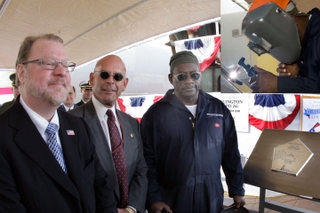 Nas Bolton, a Northrop Grumman shipbuilder (inset), welds the initials of keel authenticator Ron Carlee onto a plaque during a ceremony for Arlington (LPD 24) on Dec. 18, 2008 in Pascagoula, Miss.
View | Download (585.6 kB)