A photo accompanying this news release is available at: http://media.globenewswire.com/noc/mediagallery.html?pkgid=8360

LPD 24 is the eighth ship of the USS San Antonio (LPD 17) class of ships being built at the Gulf Coast facilities.

"This is a top-quality warship and our shipbuilding team has done an outstanding job of meeting their commitments to one of the most important milestones in the life of any ship," said Doug Lounsberry, LPD 17 program manager, Northrop Grumman Shipbuilding. "This ship was the most complete LPD to date at time of launch and the schedule was also the shortest time from keel laying to launch. Getting more of the work completed on land is the most efficient way to build these complex ships and our team has accomplished this flawlessly."

LPD 24 is currently 77 percent complete and includes upgrades from previous LPDs including a new water purification system and a new operating system for the ship's computing environment.

Named for the county in which the Pentagon is located, Arlington (LPD 24) is one of three ships Northrop Grumman is building to honor the heroes and victims of the Sept. 11, 2001 terrorist attacks. On that day, 184 people were killed in the Pentagon. The ship's christening is tentatively scheduled for spring of 2011.

LPD 24 is the third U.S. Navy ship to bear the name Arlington. The 11 ships of the LPD 17 class are a key element of the Navy's ability to project power ashore. Collectively, these ships functionally replace over 41 ships (LPD 4, LSD 36, LKA 113, and LST 1179 classes of amphibious ships) providing the Navy and Marine Corps with modern, sea-based platforms that are networked, survivable and built to operate with 21st Century platforms, such as the MV-22 Osprey and the Expeditionary Fighting Vehicle (EFV).

The LPD 17-class ships are 684 feet long, 105 feet wide and displace approximately 25,000 tons. Their principal mission is to deploy the combat and support elements of Marine Expeditionary Units and Brigades. The ship can carry up to 800 troops and have the capability of transporting and debarking air cushion (LCAC) or conventional landing craft and EFVs, augmented by helicopters or vertical take-off and landing aircraft such as the MV-22. These ships will support amphibious assault, special operations or expeditionary warfare missions through the first half of the 21st Century. 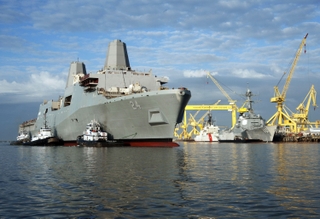